CAST CLEAN S27® is a binder system which is suitable for the production of moulds and cores. In the field of core production using the water glass process – CO2 – it is possible using this system to achieve a range of applications of simple to medium geometric complexity. CAST CLEAN® S27F is suitable for producing cores with higher flow property requirements of the moulding materials.

The S27 binder system is especially suitable for producing moulds according to the water glass – ester process. A continuous mixer or a batch mixer can be used to prepare the moulding mixture. Moulds and also self-hardening cores with CAST CLEAN® S27 can be used for all Al-, Cu- und Fe- alloys.

Seven hardeners are available in order to produce self-hardening moulding mixtures. The process time of the moulding mixtures decreases according to the application from K1 to K7. Process and dismantling time can therefore be varied from a few minutes to several hours. Fluctuations in climatic conditions can also be compensated for by varying the hardener used.

A release agent based on polyalcohol used on models and core boxes made of metal, plastic and wood. Applied thinly, it significantly improves the removability of the moulded parts produced from the mould.

With the development of the CAST CLEAN VC binder system, iron foundries, which in many
cases are customer foundries with frequently changing ranges, are to be given a possibility
of using inorganically bound cores. An essential aspect here is the elimination of an
expensive heated core manufacturing tool made of steel, which can only be justified in large
series production. The binder system used is a binder based on alkali silicate or water glass,
which has been modified with a whole range of oxides and contains no organic components.
The molding material is solidified exclusively by gassing with air at a temperature of approx.
160 ° C. The binder is a one-component binder, which can be dosed in less than 2.5%, in
many cases below 2%, without additional additives. 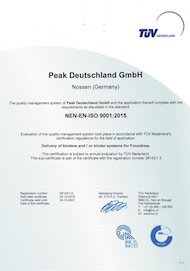